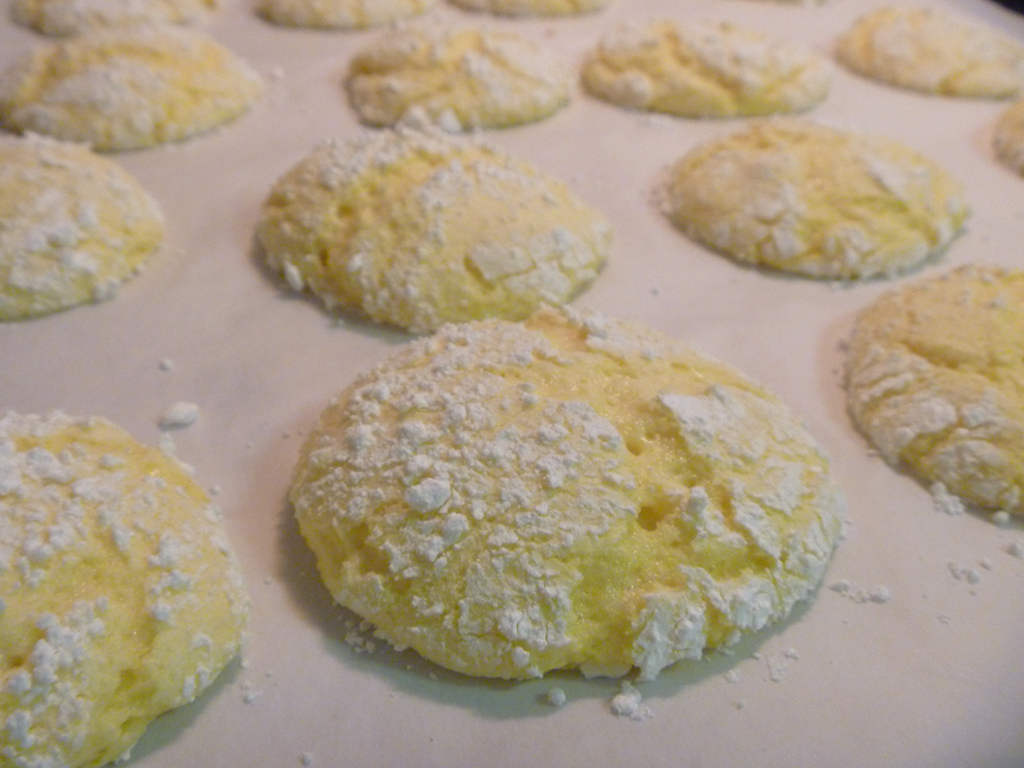 It started off like any other Sunday night.  Our bellies freshly full o’ supper, the men were in the living room watching football as the women sat chattering the night away in the adjacent dining room.  This particular Sunday, Christmas lights were twinkling in the periphery, making the whole scene not unlike a Hallmark holiday card.  As Christmas tunes played in the background creating our evening’s soundtrack, different conversation topics flitted about the room, ranging from my grandma’s haywire plumbing to the many holiday treats that my Aunt Donna had already prepared this year.  We lingered on the happier topic of baked goods, which inspired me to inquire of my aunts, “Would you like to help me bake some cookies tonight?  I need to bring some into work tomorrow.  Don’t worry, the recipes are simple, so we’ll be done in no time.”  When I was younger, I slaved over my Christmas cookies, sometimes spending up to 15 minutes bedecking each one with icing and sprinkles and whatever other edible adornments I could get my hands on.  They tasted horrible.  The wisdom of my old age has taught me that simpler cookies are better in all respects, so that is what my dad and I have settled on over the last few years.  Despite our bend towards simplicity and convenience (read: laziness), our cookies have been a hit at every event we have attended.

My aunts and I surmised that we had enough time to make two recipes, so we chose Lemon Dream Cookies and Raspberry Dessert Empanadas as our night’s focus.  I just made those names up now, as I have no idea what they are actually called.  The lemon recipe is one that my grandma found years ago, and is a new addition to our holiday baking.  I like these cookies because their texture is the best (fluffy, but not dry) and they are a nice, light break from all of the heavy foods that Christmas welcomes.  The raspberry recipe is one that my dad and I have been making for years, as we have found it to be too good to even entertain the idea of newer recipes.  As my aunts and I measured out the ingredients for our first batch, my Uncle Carl was working on a project of his own.  Unbeknownst to us, he had overheard our plumbing discussion and found it preposterous that my grandma, dad, and I were living without hot water in the shower while the water in the kitchen sink came out scalding hot.  While we were preheating the oven and greasing our cookie sheets, he was thinking, “Surely I can fix this” as he searched the house for the necessary tools.  Unfortunately, his thought pattern was about as faulty as the plumbing, and here is where the comedy of errors begins.

Let me preface this story by stating that I was having one of those days where everything was harder than it should have been.  As I wrestled with the plastic seal on the cool whip for close to five minutes, I knew we were in trouble.  On nights like these, I generally opt to sit comatose in front of the television, for when all skill temporarily escapes me, it is very probable that I’ll burn down the house.  But I had already dragged my family into this, so there was no turning back.  We were in too deep, but luckily my aunts anticipated my needs and picked up my slack.  When I selected a mixing bowl that was ten sizes too small for its contents, they gingerly blended the ingredients as not to fling them all over the kitchen.  When it became clear that my lamentable upper body strength was no match for the thick, gooey batter, they kindly took over and mixed it like pros.  They even washed ALL of the dishes more efficiently than Mr. Clean, which I was incredibly grateful for.  They were my MVPs, and they were saving the night.

Scene 2: Enter Carl, tools in hand.  To appreciate the full scope of this situation, you need to understand that my grandma’s kitchen is so small that it might even make a newborn baby feel cramped.  A preemie might find the space suitable, but a full term baby would probably prefer a more spacious arrangement.  My two aunts and I were already dancing around each other to take the cookies out of the oven, wash the dishes, and put the ingredients back in the fridge and cupboards.  Carl thought this would be an appropriate time and setting in which to fix the sink.  None of us thought to question his poor timing because we were too focused on the nightmare that the Lemon Dream cookies had become by NOT cooking at their regular baking time.  The cookies, of course, became a very minor concern when Carl’s “handiwork” produced a massive geyser that made Old Faithful look like a child-size water fountain.  Water came spewing out of the faucet at record speed, landing on EVERY single surface that my grandma’s kitchen possesses.  Included in that “every single surface” were half of my cookies that were cooling on the oven.  I examined them carefully and found that some of them had survived the torrential downpour, but instead of moving the survivors, I (foolishly) had faith in Carl and left them on the oven.  Two minutes later, he called my Uncle Joe in to guard the sink while he tinkered with the pipes in the basement, as if Joe’s presence would somehow prevent a second disaster from occurring.  It didn’t.  Water went EVERYWHERE.  You know how when you spill a small cup of liquid and it surprises you to see how much was actually in that cup?  Well, multiply that by a million, and that would be grandma’s kitchen on Sunday night at approximately 10pm.

At this point we had to split into teams to attack the tasks at hand, subtracting even more attention from the cookie mission at which I was already failing.  One team had to keep grandma occupied in the living room so that she couldn’t sense the level of mass destruction that was transpiring in her Polly Pocket kitchen.  Team 2 had to clean up the river of water that runneth through her house while the third and final team was responsible for finishing the cookies.  Batch one was soaked, batch two was overcooked, and batch three was made with dough that was entirely too thick because how the hell am I supposed to measure 1/8th of an inch without a ruler?  I probably shouldn’t have been placed on the third team, because at this point, I was drowsy, overwhelmed, and feeling like my hands had mysteriously transformed into lobster claws, completely incapable of the delicate work that is cookie baking and decorating.

Somehow, the evening ended, the faucet got “fixed”, and the cookies turned out edible.  I had nothing to do with any of it.  Most importantly, lots of chuckles were shared and memories were made.  I suppose the moral of the story is…if you lazily choose simple recipes, the universe will punish you by making something in your kitchen explode.  But if the cookies taste as good as the recipe I am about to share with you, I think making them is worth the risk;).

Merry Christmas, everyone!  May your holidays be full of laughter, love, and gluttony (don’t listen when they tell you it’s a sin)! Stay tuned for more Christmas cookie recipes, in ascending order of difficulty.

Combine ingredients well and use two spoons to roll balls of batter (1 spoonful at a time) in powdered sugar.  Place on greased cookie sheet and bake for 8-10 minutes at 350 degrees.  Tips: Sift the powdered sugar, bake one tray of cookies at a time, and take out of oven when they start to crack.  Do not let them brown. 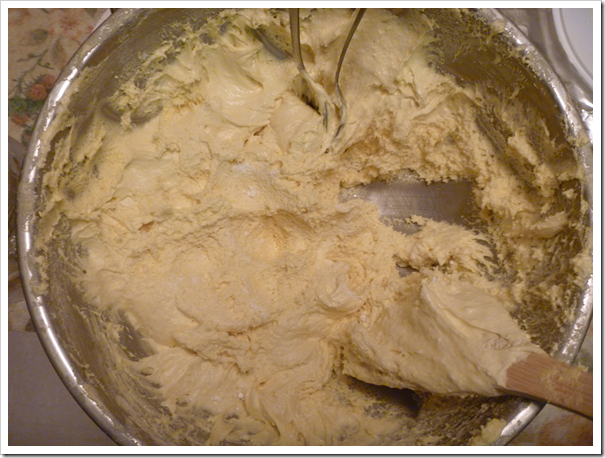 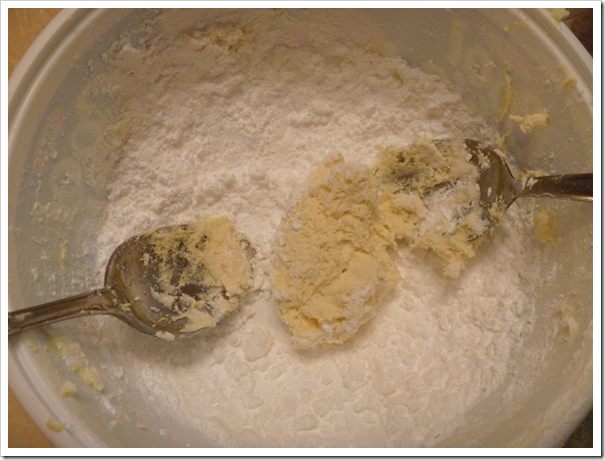 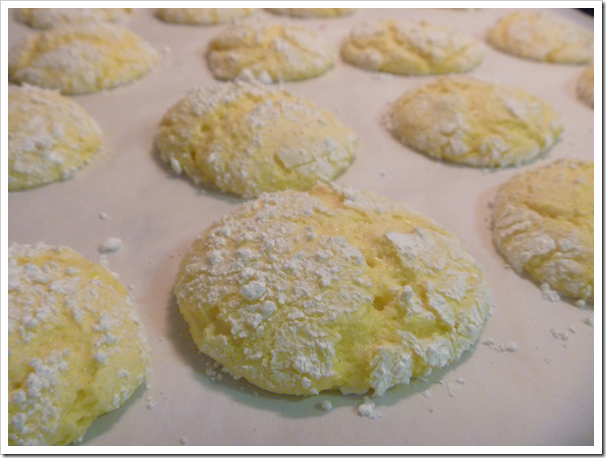 And here is the kooky cookie crew.  If you look carefully at our facial expressions, you just might be able to guess who caused the flood! 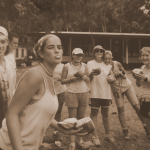 Ohhh Costa Rica, do I have a bone to pick with you! 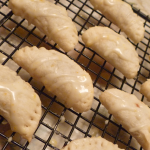 This one goes out to my homeboy Charles Dickens