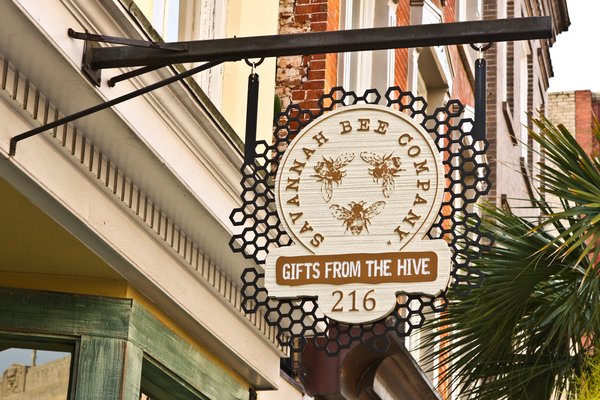 In late February, The Glutton’s Digest was invited to Savannah Bee Company’s flagship store for a private tour with Haley Bowers, who is responsible for the company’s Social Media Marketing.  By now, most people recognize the many beneficial properties that honey possesses.  In fact, honey is no stranger to praise, as its healing qualities were touted as early as ancient Greek and Roman times.  Perhaps you’ve received the mass email that’s been circulating which highlights honey’s multiple (and sometimes surprising) uses.  Just a few minutes with Haley make that email seem like a mere Cliffsnotes synopsis of the product.  One small component of her job involves posting a daily honeybee fact, which I find fascinating, because…well, I geek out on things like this.  Also, honey could easily classify as my favorite food, so it’s only natural that I’d appreciate seizing some of Haley’s knowledge.  In the spirit of full disclosure, I’ll admit that I shamefully never considered how honey is produced before our visit.  The tour made me even more of a fanatic, and I might need a follow-up lesson from Haley relaying the dangers of overdosing on honey.  Because I do so daily.

Haley, a young woman who is just as sweet as the product she promotes, enthusiastically greeted us upon our arrival.  She entertainingly reminisced about  the company’s history, led us through a honey-tasting, and patiently answered all of the ridiculous questions that swarmed through my brain during the tour.  I found the store’s ambience to be warm and welcoming, with wood predominating the décor and sunlight streaming through the windows.  It is casual, but well-organized, with its products showcased in a way that’s not at all pushy.  There is a seating area that is nestled in a giant man-made beehive, where kids can  play and adults can sip on their honey coffee or honey mint limeade. 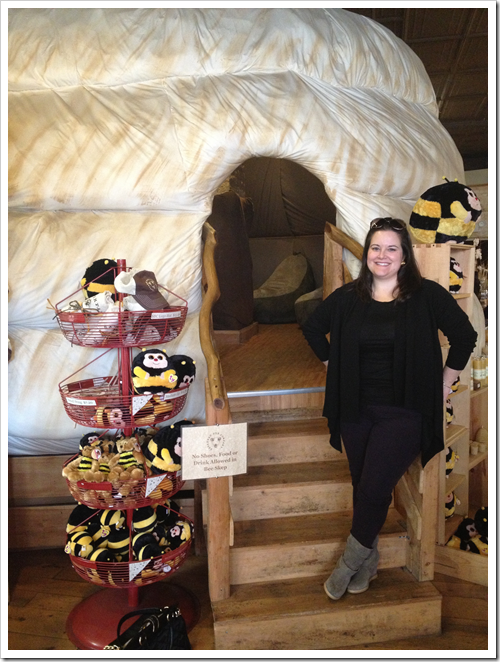 Haley explained to us right off the bat that the company strongly emphasizes bee education and community collaboration.  I adore sea turtles, and didn’t know that injured ones respond better to honey than they do to modern medicine.  To help treat struggling turtles, the company donates $3 to the Georgia Sea Turtle Center for each bottle of its Bee Buddies Honey sold.  In addition to its honey and honey-infused body products, the store sells art such as silver honeycomb necklaces designed by a local SCAD student, and Liz Guri’s encaustic paintings (which are created with “paint” made by mixing Savannah Bee Company’s beeswax with colored pigments).  Most notably (for honey addicts like me), there is a honey bar where you can taste all of the company’s concoctions.  I loved the honeycomb and the Winter White Honey, which is a seasonal spreadable honey that’s flavored with a hint of cinnamon.  We learned that some honeys, like Italian acacia honey, are very rare as they depend on the climate of small regions.  By comparing the texture and taste of each honey, it becomes clear that honey, like wine and coffee, has its own set of complexities.  Savannah Bee Company does an impeccable job informing its customers of honey’s intricacies, offering people not just a product, but an education.

So what else did we learn?

Where do I even start?  Perhaps by revealing how I thought honey was made before meeting Haley (please don’t judge me).  Was I alone in thinking that bees stung flowers and carried their nectar to hives where it later crystallized into honey?  For those of you who share my honey handicap, I’ll briefly explain the actual process.  Honeybees use their tubular tongues to suck nectar out of flowers, storing it in one of their two stomachs.  It is then carried back to the colony for a mouth-to-mouth transfer with a worker bee, who chews the nectar, infusing it with enzymes that convert its complex sugars to simple ones and make the nectar less likely to accumulate bacteria (so yeah, honey is essentially regurgitated nectar, which might be gross if bees weren’t so clean and cool).  The bees then deposit the nectar into honeycomb cells, where other bees fan it with their wings to decrease its water content.  When it has reached its desired consistency, the bees seal the cells with their homemade wax to store it for their winter sustenance.  When collecting this honey for human consumption, good beekeepers leave more than enough to sustain the bees during the long winters.

Speaking of beekeepers, you may be wondering who started Savannah Bee Company.  Haley kept lamenting that we hadn’t gotten to tour with Ted Dennard (the company’s founder), but she wasn’t giving herself nearly enough credit.  She spoke with admiration of her boss, who apparently presents as more of  a surfer than an entrepreneur.  Behind his relaxed façade, though, are years of beekeeping education and practice.  Ted was introduced to the craft as a young boy, after which he kept his own bees throughout high school and college.  He later served with the Peace Corps in Central America, where he taught beekeeping in small villages, and he followed his service with world travel to expand his beekeeping knowledge.  In 2002, Ted decided to turn his passion into a career, which is how Savannah Bee Company came to be.  While I haven’t met him, one can deduce from Ted’s store and website that he is a humble, innovative guy.  Both seem to be less about him and more about the bees, which in our current age of narcissism, is very refreshing.  I also admire that Ted took the risk and initiative to live out his passion to the fullest, passing his zeal along to his employees and customers.  Don’t be afraid to jump on the bee-mania bandwagon!  I promise it’s way more pleasant than a bee sting;).

While Savannah Bee Company’s website is very informative, and all of its products can be purchased online and in stores across the U.S., I highly recommend visiting the flagship store.  You don’t live near Savannah?  Me neither!  Why not take a road trip like The Glutton’s Digest did?  You’ll learn a lot, and your taste buds will drown in sweet, sticky bliss.  We were so inspired by our visit that we bought a bunch of honey, came home, and started experimenting with it.  Through our trials, we learned that honey is just as versatile as it is sticky!  We’ll post our recipes all this week in a series that my best friend (in a stroke of what she considered genius) wanted to call, “It’s been a really buzzy week.”  The verdict is still out on that title, but be sure to stay tuned for our recipes.  In the meantime, start planning your Georgia getaway!  Ted, Haley, and a buzzworthy company await you! 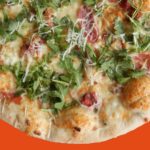 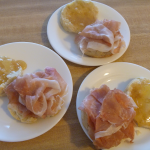